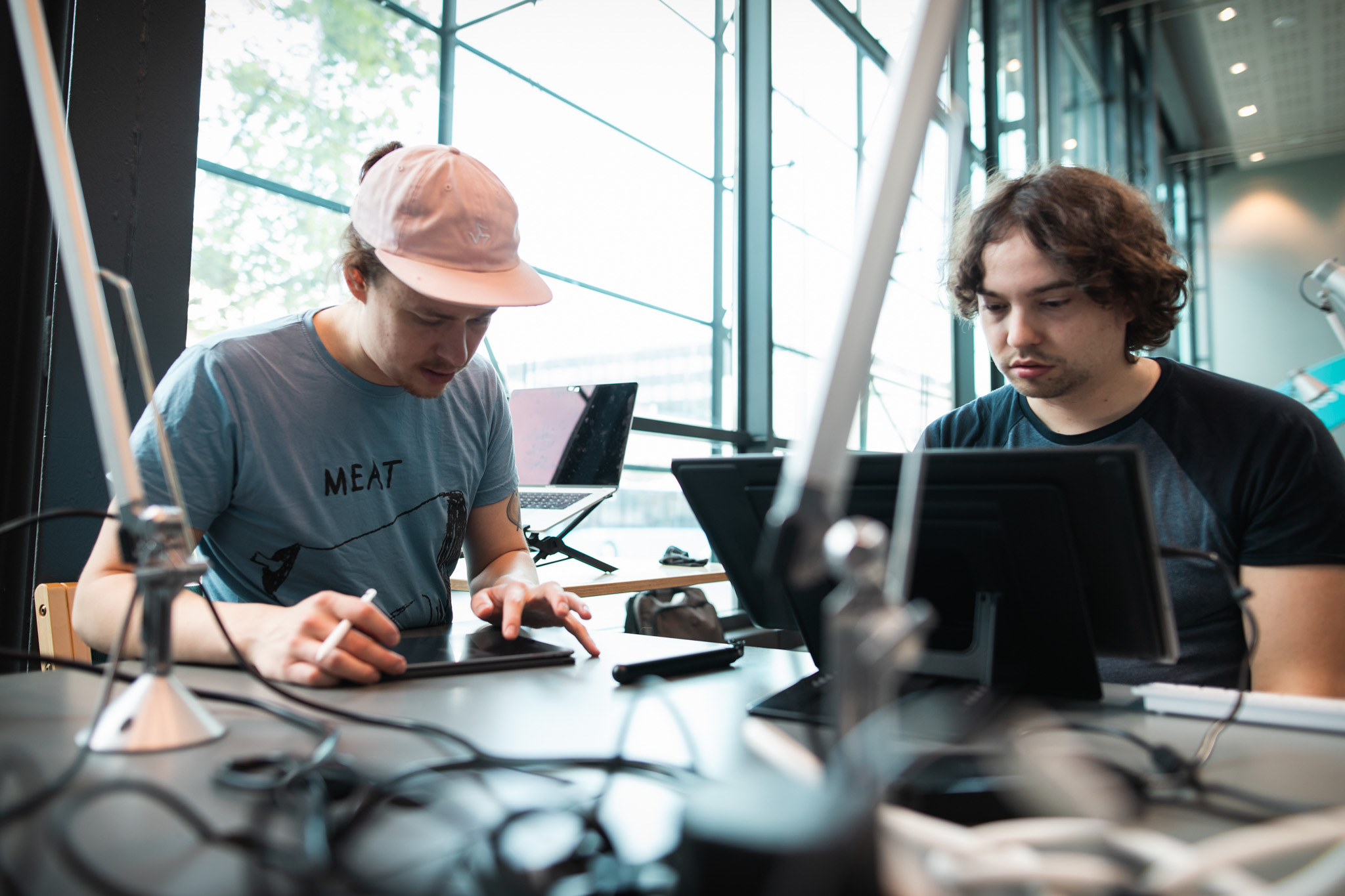 I’m pleased to have immersed myself in the first ever Eko Game Jam on June 14.-16. at Terkko Health Hub in Helsinki. Although climate data and fun seem like an unlikely pair, efforts to combine these turned out to be an awesome idea. In addition to the warm meals being creatively catered from waste food by Hang On, which contributed to 100 kilograms of waste food being rescued by tens of jammer bellies, 12 game prototypes were made! This is a good amount for a first-time game jam. The organizer, Avoin, has ambitious wishes for Eko Game Jam to become an annual and international blast of combining researched eco data and fun game-making.

The jam creations range from ridiculously humorous and quirky to genius. Out of the 12 game prototypes, 9 were created onsite, 2 online, and 1 as a hybrid of on-site and online teamwork. International jam levels were achieved and some even traveled to Terkko. In addition, Eko Game Jam got nationwide jammer support.

Welcoming words introduced ecological data. Representatives of Sitra, Finnish Environmental Institute (SYKE), and Arctic Center held presentations. With goals to change everyday habits of Finns, Ari Nissinen from Sitra brought forth frames for games through their Lifestyle Test’s four themes: living, transport and tourism, food, things and purchases. Similarly, SYKE’s representative Markus Tenho introduced their Climate Diet calculator and dreams about all popular games having carbon meters. Ilona Mettiläinen from Arctic Center made a strong case for polar bears. What I learned is that the whole of Finland is actually classified as arctic and therefore the changes in temperature are more noticeable here. These and more information was added beforehand to Eko Game Jam’s website.

Furthermore, Annakaisa Kultima from Finnish Game Jam told us about different kinds of game jams to keep in mind after this event. Finally, scientist-author Risto Isomäki donated a neat pile of his book 66 Ways to Absorb Carbon and Improve the Earth’s Reflexivity for the jammers to take. We were all set!

Instead of reporting Eko Game Jam from an outside perspective, as I first imagined doing, the event inspired me to go all in. Likewise, the Think Company host, who started his Terkko night shift, plunged enthusiastically straight into jamming for the first time.

Team formation was much like a Goldilocks experience. I approached a friendly-looking group but like a whirlwind so did everybody else - it was too big. After that, I proceeded towards a familiar Game Development Mentor. He was happy to help but might also assist others. This left me worried I would make art, music, and writing all by myself. I wanted more of a team experience - it was too small.

Afterwards, I saw some faces I encountered at Jam Jam Festival a week earlier. A brainstormed idea about making hard decisions between climate change and social inequality got me excited. As a topic, the latter raises the pulse and knocks the socks off any social science oriented person. I offered my services as a writer trying to lock down the position with my storytelling experience and bachelor’s degree in sociology. The programmer suggested a similar gameplay to indie game Papers, please! We were sold - just right!

The making of the game was straightforward. When an important aspect was confusing, for example, which items are vital for the game and how to display them, we held meetings on the plastic indoor patio. Meetings were fruitful for decision-making. We also made a Google docs for basic info and inspiration. Discord was used to share items and report fantastical progress.

A weekend isn’t much for game-making though. Most of the time jammers worked solely via computers, drawing tablets, and attachable instruments. Eko Game Jam offered activities, such as the optional outdoor walk to the Sibelius Monument. Four jammers participated, which is actually a lot considering how unbreakably focused the workflows were.

Other Eko Game Jam offerings included sleeping spaces onsite, which our Estonian teammate utilized. The light breakfast, lunch, dinner, and snacks were fitting. Vegans could eat donated and rescued food and drinks. Moreover, meat lovers received rescued meat, which is awesome for the environment! Hang On finally made long-awaited pizzas for the final ceremony, where teams showcased their game prototypes.

Most of these prototypes can be played in Eko Game Jam’s itch.io page and gameplay videos of all of them can be watched on Avoin’s Youtube playlist.

Climate, please! is a calm strategy and aggressive action game. As an effective lobbyist, your mission is to end climate change without civil or corporate unrest. Swipe right to approve climate-friendly motions or left to disapprove them. If you get tired of paper pushing, you can go out and rely on direct action and throw people towards more sustainable acts.

EcoRun is a visually impressive obstacle game. You are running, jumping, and crouching as a dinosaur. There are objects, like trees, in the way as well as different kind of food items, like bananas and cheese, on your path. With the energy and climate bar to guide you, the goal is to eat ecologically without starving.

Eko Eko Jam Jam is a high energy puzzle game. The intro has an epic public service announcement for the environment. With 8bit music playing in the background, you play Tetris with Snow Cannons and Eco Fire Missiles in a polluting city where cows roam free.

Ekopeli & Lumen is an outdoor educational game. By eating fruits you get seeds, which can be used to plant new trees, garbage bags ideally go to garbage cans, and returning bottles give you money. The pencil crayon drawing style gives the game a sympathetic and easy-going feel.

King 2019 is a global warming simulator. You play as the king and make decisions regarding your land use. You see how your decisions would affect the current stats on CO2, Population, Food, and Happiness. The final decisions are yours.

Land of Threes is a puzzle game inspired by Triple Town. You place buildings in rows while trying to get as little emissions as possible with the help of trees and plants. The values of CO2, CH4, and N20 are what you have to keep an eye at.

Lehto is an adorable environment building game. By building habitats the forest critters and insects might be interested in, you increase the variety of plant and animal life - biodiversity. Like a Pokedex for pokemon, when you have attracted these animals, they will appear in a book and you get information about them.

Lifestyler is a lifestyle game, which you can play worldwide and download from Google Play. Crumpy Eco Teddy wakes up too early from hibernation since the snow has melted and directs humans towards sustainable life choices in different ways. This prototype was made in collaboration with Avoin and game mentors helping to organize Eko Game Jam.

Mornin El Presidente is a ridiculously funny visual novel. As El Presidente, you make decisions regarding your day. What you do is accompanied by a very imaginative, sometimes climate-related, commentary. In the stream of thought writing and surprising fantasy situations, the story eventually makes you decide between three endings. The art is probably done by Paint.

‍Polar Panic is an action game, which catches the essence of polar bear hardships. The polar bear tries to eat seals, which pop up everywhere. Catching seals add health. The polar bear moves slower in water than on the ice, which keeps melting away, unless you also manage to click on the small CO2 bubbles to deplete the emissions.

Silly Sam is a pixel art lifestyle game. You play as a smart house for silly Sam, who leaves all the lights and appliances on, such as heating and air conditioning to get that nice middle ground. This raises the indoor temperature and CO2 emissions. Your goal is to lower emissions and click off the appliances after Sam has left a room.

Don't hesitate to ask any questions. Send us a email and we will get back to you!

Thank you! Your submission has been received!
Oops! Something went wrong while submitting the form. You can send us an email directly to info@avoin.org.
Back to Home